It was a tremendous ROK Cup USA ROK Vegas event for Florida based Speed Concepts Racing (SCR). Bringing a handful of SpeedLab Racing Engines powered Redspeed by OTK drivers to the annual event, SCR earned two ROK Vegas Championships and a total of four podiums on the temp circuit adjacent to Planet Hollywood. 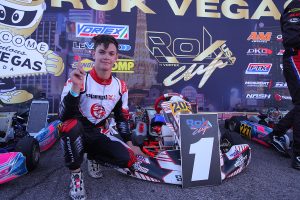 Kicking off the festivities on Championship Sunday was VLR Junior driver Ayden Ingratta. After claiming the OMP Pole Position award on Thursday and two heat race wins, the Canadian would start Championship Sunday from the inside of the front row. Crossing the stripe first and looking to have scored the win, Ingratta was penalized two positions following the race for a minor on track incident. Unfazed by the penalty, Ingratta returned to the track later that afternoon to dominate the ROK Junior class. Improving from his second place qualifying effort and rebounding after a heat four 13th place result due to contact, Ingratta stole the show by taking the lead on lap one and cruising to a dominant 5.7 second victory.

Fellow junior driver G3 Argyros had one of his best events with Speed Concepts Racing earning a pair of top-ten results in both VLR Junior and ROK Junior. Running consistent and staying out of trouble, G3 took to the barrier lined circuit and barely put a wheel wrong all weekend. Finishing eighth in the VLR class, Argyros returned later that day to finish ninth in Junior ROK. Having only one of eight heat race results outside the top-nine, Argyros is hitting his stride and should be a contender in 2022.

Scott Roberts saved his best drive of the weekend for Sunday's ROK Master main event as he was able to capitalize and drive to another SCR victory. After qualifying sixth and progressing through the heat races with fourth, third, first and third place finishes, Robert flexed his muscles in the main event driving to the biggest win of his karting career. 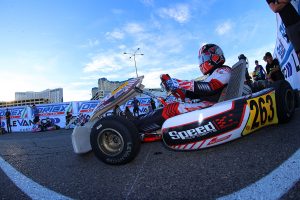 Jack Jeffers proved his speed and pace in the ROK Senior class by taking the OMP Pole Position on Thursday and followed that up with a heat race win on Friday. Taking the lead early in the ROK Senior main event, Jeffers looked to have the victory in the bag until a broken radiator mount hindered his progress. With the radiator bouncing off the rear tire and risking damage, the cooling of Jeffers' ROK engine was basically nonexistent causing the water temperature to rise and a loss of power. Trying to hold the lead, Jeffers came up one corner short and finished on the podium with a second-place result. Ryan MacDermid made his return to the US karting scene and competed in one of the most talent filled senior classes in ROK history. Taking on a stout field of nearly forty drivers, MacDermid was classified just outside the top-twenty after the four heat races. Moving forward in the main event, MacDermid was forced to retire ending his chances at a top-ten result.

Hayden Wise competed with Speed Concepts Racing for the first time in 2021 as she tackled the temporary circuit of ROK Vegas. Taking advantage of the SCR driver training program, Hayden showed huge improvement throughout the weekend. Mathias Ramirez had a weekend to forget in Shifter ROK. Incidents in the heat races put him in the mid-pack hornets next where it was just a battle to survive. In the end, Ramirez was awarded with a 14th place result out of the 56 registered ROK Shifter drivers.

"Congratulations to Ayden and Scott on their ROK Vegas wins. These two guys worked hard and deserved it," explained Mike Speed. "I feel terrible for Jack as he did not drive like the senior rookie he is, and the race win was his. He has a very bright future, and I think you will see him on the top step of the podium a lot in 2022." 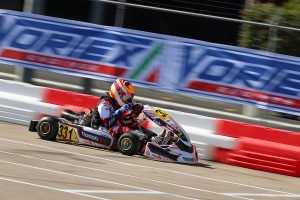 Next up for SCR is the annual Superkarts! USA (SKUSA) SuperNationals in Las Vegas. Stay tuned for our preview report prior to the event weekend.

Speed Concepts Racing has opportunities for drivers in their 2022 regional and national level program. Please contact Mike Speed at Mike@Speed-Concepts.com.